I will start by saying that I find it difficult to put  Nuit Blanche into a narrative. It is too much about the moment, about the direct interaction with art, celebrating it in all its forms. It must be experienced. Nevertheless I will try to share my impressions.

Most of the events were concentrated in Marolles. This year the focus was even more on digital arts but also on music, dancing, performing. The imagination of the concept creators had gone even further in turning public spaces, often rather unexpected ones, into canvases, stages, artistic environments.

My nuit blanche started at Kili gallery in Rue de la Samaritaine. A woman was signing, standing in the door of the gallery, and another one was performing a sexy dance with her back on the wall.  The singer, Natalie Rozan, was telling us about “the frivolous past of the Marolles district”. I didn’t hear these lines but I found them in the summary and think they perfectly fit here: “I am from Brussels and proud of it! Goddammit, man!”.

Then I entered the aquarium of the lift of Marolles and was faced with the digital red Princess fish. Put there by the French artist Stéphane Masson, “it” was about to spend the coming hours in the company of a multitude of strangers, entering its mobile home up and down.

A jazz concert, performed by two musicians, kept me for a while in the newly opened Macadam gallery at Place de Jeu de Balle. It was an intimate and touching experience.

In the other end of the square a band dressed in doctors’ and nurses’ uniforms was making, with their cheerful ethno-jazzy rhythm, the standing crowd to dance and clasp with hands.

GALERIES Cinéma and Mike Latona had made, in the swimming pool at Les Bains de Centre, a screen from 50,000 polystyrene balls on which a 3D game of lights, colours and sound was happening in complete darkness.

The Kosmocompany dance group attracted hundreds of young people to follow them in a flash mob, called the Blast Dance, at Sablon. The purpose of it was to give a response to all the disasters of our contemporary world.  They showed the dance choreography and the crowd turned the square into an open air dance floor. The wave they created with their hands was energesing and empowering.

Dancing had taken over the corridors of the Royal Conservatory as well. Numerous artists were communicating with movements in a dance marathon.

The Notre Dame de la Chapelle church had joined the initiative with two installations. In its entrance Mary appeared in the form of seven contemporary and anonymous women each bearing the attributes of the Virgin. Their ethnic and physical differences were meant to underline her universal character. Inside the church a video installation of Belgian visual artist Bernard Gigounon had put four screens  in the opposite corners. Four singers – tenor, countertenor, soprano and baritone – from the vocal ensemble Currende, were performing polyphonic chants of the XVIth century. Transcendent it was. 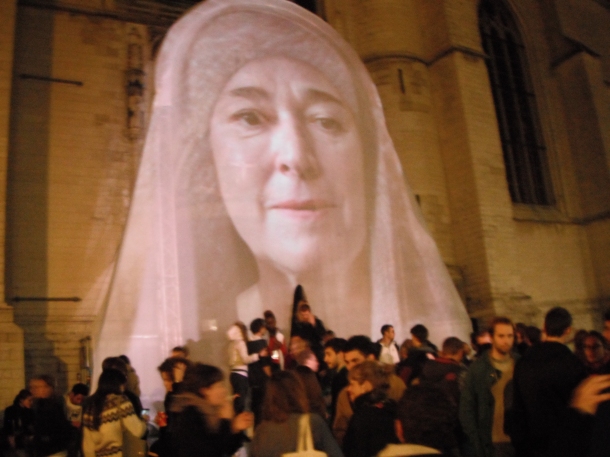 In Temps réels installation  by Stéphane Bissières and Etienne Bernardot, at Recyclart, one could literally play with the digital images by touching them with finger, keeping them at one place or moving them around the screen, producing diffusing figures.

There was so much yet to be seen and experienced…but how much more can one perceive and reflect on in a night anyway? For me this was enough. I came back home happy and full of images, sounds, ideas.